Choose an AGM battery for your boat

The AGM battery like their cousins the Gel cell battery are also classed as Sealed Valve Regulated (SVR) batteries. The battery electrolyte is held within a very fine microporous (boron-silicate) glass matting that is placed between the plates. This absorbs and immobilizes the acid while still allowing rapid plate and acid interaction.

Another term used for the AGM battery is starved electrolyte batteries, and this is because the glass matting is only 95% soaked in electrolyte.

In a normal lead-acid battery, water loss will occur when it is electrically broken down into oxygen and hydrogen near the end of charging.

In normal batteries, the evolved gases disperse to atmosphere, resulting in electrolyte loss and periodic water replacement, and these are the bubbles seen in the cells during charging.

During AGM battery charging the current causes decomposition of the water, and oxygen is evolved on the positive plate. The oxygen then migrates through the unfilled pores of the separator matting to react with the negative plate and form lead oxide, lead sulfate and water.

The charge current reduces and does not generate hydrogen. The low maintenance recombinational battery has different characteristics.

The plates and separators are held under pressure. During charging, the evolved oxygen is only able to move through the separator pores from positive to negative, reacting with the lead plate to recombine.

This AGM battery recombination process reduces water loss by over 98% in comparison to wet cell batteries, so the elimination of maintenance is obvious. The recombination process is different to a gel cell and takes place within the separator in a molecular state, with the cells being sealed and the relief valves provide a safe positive pressure during charging. 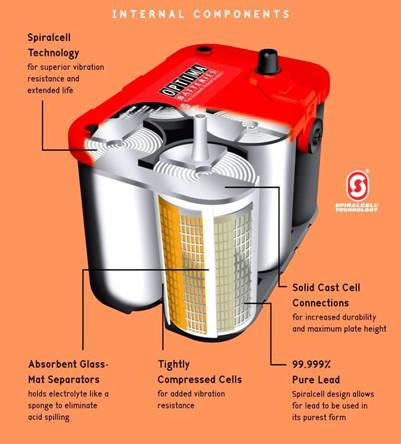 There are variations to traditional flat plate manufacturing techniques, and the Optima® AGM battery has a unique spiral cell, and dual plate construction. Another important claimed feature is a greater shock and vibration resistance than gel cell or flooded batteries.

They also have extremely high CCA values of up to 800 amps at 0ºF, however the one drawback that stopped me installing these was the limitation in rating sizes, which is only 56 Ah. They are however a very good option for smaller boats. Charging of AGM battery cells have few limitations, and no special charge settings are required to smart fast charge regulators. Consider an AGM battery for your boat. 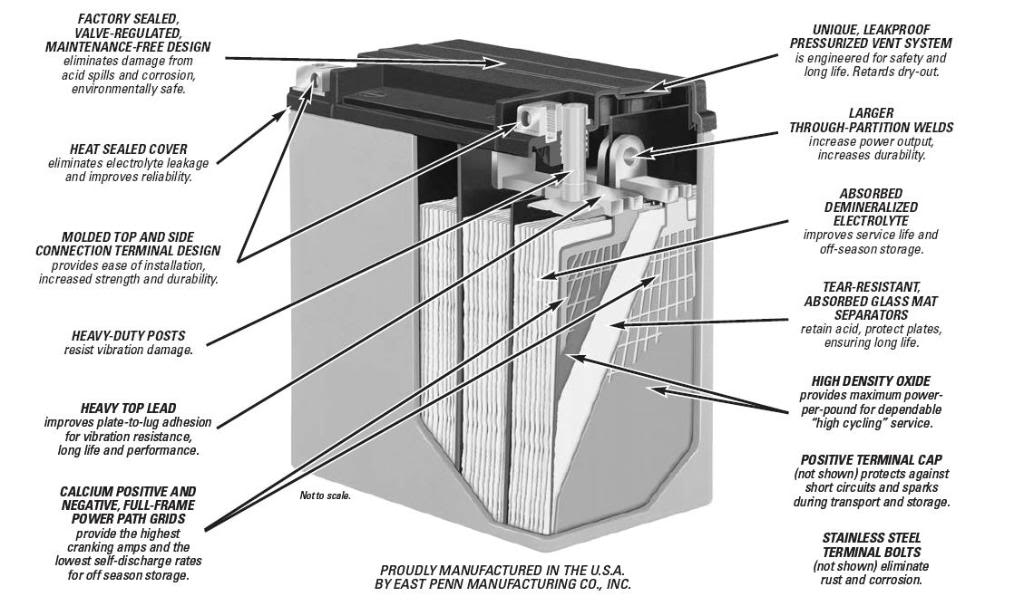 The AGM battery has a very low internal resistance and during heavy charge and discharge there are no heating effects. As they have a high charge acceptance rate they can be bulk charged at very high currents, typically by a factor of 5 over flooded cells, and a factor of 10 over gel batteries. The AGM battery can also allow 30% deeper discharges and recharge 20% faster than gel batteries and good recovery performance from full discharge conditions.

Self-discharge rates on an AGM battery are only 1%-3% per month at 77°F, which is improved over rates in flooded cells and gel cells. Water loss can occur in batteries, and this is caused by decreases in the efficiency of recombination. Excessive charge voltages in particular float charging, corrosion of grids, transpiration through the cell casings (so keep batteries as cool as possible), and self discharge, which also increases with higher temperatures. Consider an AGM battery for your boat.

If you are a weekend, harbour or river cruiser, that does limited motoring periods, or leave your boat unattended for fairly long periods, the AGM battery is a viable proposition, as it has very low self-discharge rates, and very high recovery rates from deep discharges. As charge acceptance rates are very high on a AGM battery and charging is in the range 14.4 to 14.6 volts then a fast charge regulator has the capacity to burn out alternators. Many undersized alternators run at full output for considerable time periods and overheat.

There is a good case for installing high output alternators to maximize charging with an AGM battery, and the added load on the engine is a bonus. I have recently installed an AGM battery bank so I will be watching the overall performance closely. Consider an AGM battery for your sailing or power boat. all about boat batteries.